Search
In UK Feild Target, competitors aim to shoot the small “Points” zone that forms part of a larger metal faceplate. These face plates are often shaped to resemble small animals. On most competition targets, the hit zone forms the end of a short lever that tips the faceplate backwards when successfully hit. These targets have to be reset by tugging on a length of cord attached to the faceplate above the hinge.
Targets are shot from open “gates” in a firing line, and are divided into “lanes” of two targets each. Many competitions impose a time restriction of 2 minutes to shoot both targets after a competitor first looks through his or her sights.
Targets may be placed at any distance between 8 yards (7.3 m) and 55 yards (50.3 m) from the firing line. Targets are often placed at about the same height as the shooter, but it is not uncommon for them to appear high up banks or in trees, or down steep slopes.
The hit or “Points” zone of a target is always circular, and nominally 40–45 mm in diameter, although “reducer” targets as small as 25 mm diameter may be employed for seated shots up to 35 yards (32 m). The targets are painted with the kill a contrasting colour to aid visibility, although the paint is quickly removed by hits during competitions, making it harder to distinguish.
The majority of shots may be taken in any stance, but the seated position is the most popular due to its stability and often the need to see over logs or long grass that would preclude prone shooting. Most competitors carry a small beanbag or cushion to sit on while shooting. It may also be used under the knee or to support the ankle during kneeling shots, and they are often used as a protective rest for guns while competitors wait their turn to shoot.

In competition, 20% of the lanes will be designated as compulsory standing or kneeling, and there must be as even a split as possible between the two. Most competitions have 40 targets arranged in 20 lanes, so it is usual to have 2 standing lanes and 2 kneeling lanes. Grand Prix events have 25 lanes, so there will be 2 lanes of one position and 3 of the other. Standing or kneeling targets must be no more than 45 yards (41 m) from the firing line.
Points are scored with 1 for a hit (resulting in the faceplate falling), and 0 for a miss (whether it strikes the surrounding faceplate, misses it, or “splits” on the edge of the kill but fails to down the target). The highest score of a competition forms the benchmark for all the other scores – they are calculated as a percentage of this score rather than the total number of targets. This means that competitors attending a shoot on a windy day will not necessarily affect their average score over a season, as the highest score of the day will probably be lower.


Members of the British Field Target Association (BFTA) are graded according to their performance every six months. Your average percentage score over this period determines which of the four grades you are given – (in ascending order of skill) C, B, A and AA. Prizes at shoots are awarded by grade, so less experienced shooters still have a chance of winning a trophy if they perform well.

In the UK, 0.177 inch (4.5 mm) calibre rifles are the most popular, as the higher velocity (relative to a .22” rifle of the same power) of the pellets means they fly with a flatter trajectory over the distances involved. One downside is that .177” pellets are very light and can be affected more by light crosswinds than the heavier pellets of a .22” (5.5 mm) rifle. Pre-Charged Pneumatic (PCP) rifles are more popular than spring guns as the much lower recoil provides more confidence in aim for most people. There are some FT shooters who compete at a very high level with a spring gun, and a well-engineered gun, shot with some skill will be no less accurate than a PCP. There are some “dedicated” FT designs available, with the main features being a deep stock or adjustable platform (“Hamster”) to rest on the knee while shooting seated, a high or adjustable cheek-piece to suit the large telescopic sights, and often an adjustable butt or butt hook. Many experienced shooters have chosen to use made-to-measure custom stocks for their rifles, and there are a small number of stockers in the UK who compete in FT and have a good understanding of the specific requirements of the sport. 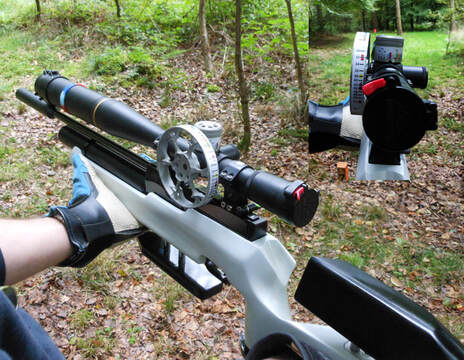 Telescopic sights are favoured for obvious reasons – it is often difficult to see the points zone of the furthest targets clearly with the naked eye. Another advantage of high-magnification scopes is their ability to act as a simple range-finding tool. At very high magnifications, most scopes have a very shallow depth of field, and one can accurately focus on a series of targets at known distances and mark the scope for future reference. In competition you simply focus on the target and deduce the distance from the marks you made on the scope’s focus control. Some scopes use a side-wheel parallax adjustment to control focus (rather than a camera-like focus ring on the objective bell of the scope), and this allows the use of large diameter wheels to increase the distance between range markings and effectively improve ranging resolution.